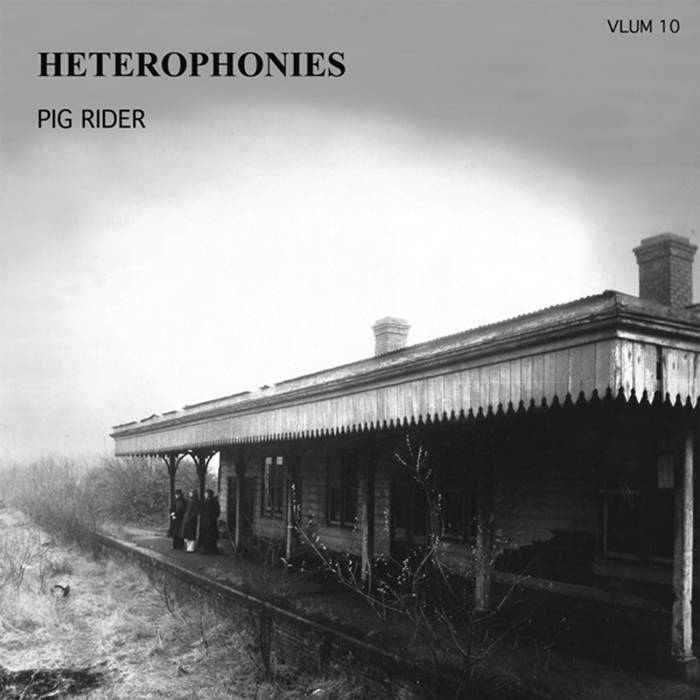 Although nearly 60 people have played in Pig Rider or its various offshoots over the years, there have only been two ever-present members, Colin Kitchener and John Mayes, who founded the band at Sevenoaks School in Kent, England in the late 60s. They met when they were 12, and not long after began haunting the music rooms at the school to hammer out current three-chord pop songs on pianos.

After a number of other names (including D Jabferg Flossyakkit and Bob Scratch and his Country and South Eastern Spring Blues Band) they settled on ‘The Pig Rider Robinson Heterophony’ to perform under. After an attempt to build a seven-foot robot bassist called Peregrine Robinson to front the band failed the name was finally abbreviated to its current form.

Pig Rider’s music has been described as “joke folk / mock rock” but there’s also a real psychedelic element to it Also, they should be regarded as pioneers of the DIY movement which would came a few years later. They recorded at home with rudimentary equipment, they used handmade modified instruments (“orgasmatron”, “banjelele”, “torture machine”, “aquaphone”, “swanee bicycle pump”…) and they self-released a series of acetate only albums housed in primitive, handmade sleeves.

“Heterophonies” was originally pressed by the custom label Deroy as a private edition of five acetates in 1975. The music is an amazing mix of psychedelic electric folk, acid folk and twisted pop with funny / bizarre lyrics, tape experimentation and homemade / stoned atmosphere (despite the band claiming that their minds were only altered by lot of beer!).

In 2009, a review of “Heterophonies” appeared on the Galactic Ramble book. Richard Falk said: “…Heavy, lo-fi, electric folk with lots of weird electronic effects and a distinctly psychedelic atmosphere…”. That review was the clue for French collector Alexandre Mansuy to track down the band in 2013: “What I was on the point to discover was way beyond my wildest dreams.” Heterophonies” was only one of their many, many great recordings - 22 in all, including the 45rpm and tapes, complete, and to date unperformed, opera for schools, a song-cycle about Luton, a town they knew nothing about; songs designed to be played backwards, songs which are slightly offensive and others which are too offensive to play at all, anywhere, ever.”

Thanks to Alexandre Mansuy, we present a comprehensive Pig Rider reissue campaign, which started last June with “The Robinson Scratch Theory”, a compilation of their amazing 80s stuff. And we continue with two of their rarest acetates from the 70s, “Heterophonies” and “Bloody Turkey Sandwiches”.

You can buy the LP/CD at: www.guerssen.com